We would like to introduce you to another very important person in the legacy of Native Sons & Daughters Programs.  June Friday-MacInnis. Until 2017, June was the oldest living niece of the great Joe Friday, Ojibway Indian whose inspiration gave the program a Native American theme about 90 years ago. Joe Friday was her uncle as her father Willie, was one of Joes brothers. Sadly, National Longhouse learned that June passed away in August 2017 at the age of 86. She was very important in the legacy of Native Sons & Daughters Programs and was very proud of her family’s part in the NSD legacy.

June was born at Fridays Point Lodge, on Lake Temagami, on June 11, 1931.  Fridays Point was a tourist fishing lodge operated by the Friday family, near the northeast arm perimeter of Lake Temagami, Temagami, Ontario, which for reference is about 5 hours north of Toronto, Ontario Canada. She weighed only 3lb.,8 oz. and needed special care by the tribal birth women (called midwives today) as the doctor thought she would not survive. She and her mother got special treatments at home till September when they both started to get along better and (as they say) the rest is history.

Her Ojibway name was Abamageis, which means Strawberry Month which the month of June is considered. She was a part of the White Bear Clan recalling the old story of Chief White Bear taking into his family those women and children when their father died. White Bear did this many times for other families over the years as do the Ojibway traditionally even now.

Her education until age 9 came from her family, primarily her brothers and sisters who would read to her. Her ability to read was important when she finally started school in the Christian grade school then completing high school.

She married in 1947 after her then to be husband got back from WWII. June had 3 boys and a daughter (who died in 2005), as well as  6 grandchildren and 6 great grandchildren.

For many years she taught the Ojibway language, traditions and history to interested children and young people as those ways and words have gone to pass with younger generations.  She most recently lived in Northbay (an hour below Temagami) for a number of years at a senior center where she had been very active.

In later years, she would read and knit, knitting all kinds of clothes and things that she mostly gave away for gifts to community centers and friends. She also wrote a series of stories about her family and history and in 2016 realized her dream to see those stories in print when Friday Memories – (The Life and Times of June Friday MacInnis) was first published. 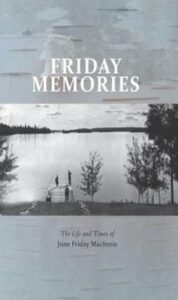 Additional: In July 2006, several National Longhouse elders and some of their children journeyed to (and lodged on) Bear Island on Lake Temagami and visited the North Bay home of June Friday-MacInnis for several days. We were told that we had been the first people to visit the island from the program since Joe Friday was laid to rest in the spring of 1956. June and her family are extremely proud and honored that National Longhouse would want to carry on the legacy of what Joe Friday had inspired and helped to create so many years earlier. They opened their doors to us as if we were family. During that trip, National Longhouse presented June Friday-MacInnis with the Joe Friday Award, in honor of her and her family’s contributions to the legacy of NSD Programs.