We are pleased to announce that Jim Sawgrass is our newest member to the Native American Council (NAC). Mr. Sawgrass is a Muskogee Creek Indian and a professional Native American performer who’s live shows have been complimented by appearances in television and historical films. His performances provide an educating look at Native American dance, music, and demonstrations among others things. Jim has served as an important role model to his teenage son who is also a professional dancer. 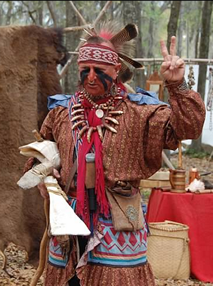 For more than twenty years, Jim has interacted with parent/child programs primarily in the Florida and Georgia area. He understands the importance of having a real Native American presence as a part of a program that embraces a Native American theme.

The Native American Committee — which Jim is now a member of — advises the NATIVE SONS AND DAUGHTERS PROGRAMS ℠ on use of the Native American theme and leads in the development of educational resource material pertaining to First Nation history, beliefs, and rituals.

The goal of the NAC is to compile fragmented ceremonies and rituals from out-of-print books, resources, and handed-down traditions. Then by incorporating this “best-of” the old compilation with newly created material, they hope to uplift those Native American elements that are in need.

Jim brings a fantastic new idea to the table and says he is willing to develop Native American education & demonstration videos for the program. This will be a great way to reach our masses at gatherings, campouts, and tribe meetings. Not only will it teach our children about the First Nation theme and culture, but help excite parents about theses aspects as well.

Our new NAC member talked about his exposure to parent/child programs over the years, and says he has seen the good and the “not so good” when it comes to the use of the program’s Indian theme. That is his key motivation in wanting to help us with our mission.

You can learn more about Jimmy Sawgrass by visiting his websites: